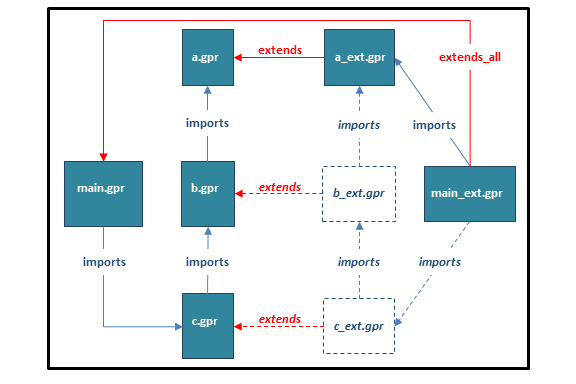 Implementing the various components of a software project can be a tedious task. This is why, for many years, a set of tools has been developed to facilitate, secure and systematize it.

This article is an introduction to one of the existing solutions named GNAT GPR (Gnat PRoject).

This toolset makes it possible to manage multi-language projects of extremely variable size and nature. Even if this technology was first introduced in the context of Ada projects, it is not dedicated to this language and may be used in other contexts.

The GPR technology makes it possible to build and manage multi-language projects simply and efficiently.

GPR files can depend on other GPR files in a modular way.

This modularity simplifies the integration of complex systems while allowing the reuse of existing projects.

The technology is based on the GPRbuild tool, among others.

This tool interprets a GPR file (.gpr) containing a description of the project.

There are several types of GPR and therefore projects:

A GPR file describes among other things:

This description is done through a syntax close to Ada.

Within the framework of more or less complex projects, the articulation of the GPRs reflects the architecture of the application(s) and possibly of the system.

As a result, a complicated and unclear articulation of GPRs is probably a reflection of a much deeper problem, namely a poor overall application or system architecture/design.

A browser integrated in the GPS development environment (GNAT Programming Studio) allows to clearly visualize the dependencies between GPR. Below is a typical project developed by Systerel which is complex but also reflects a good structure. 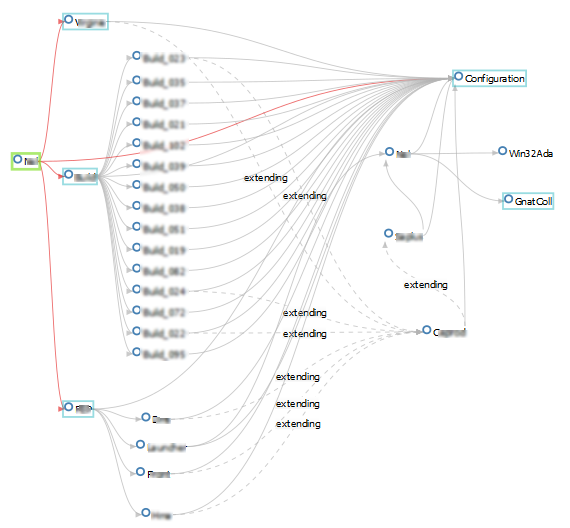 Dependencies for a complex project

This very simple example will present the GPRs of types:

As well as the use:

In this example we describe through the GPRs:

The generated application performs the convolution of an image. The framework is in Ada 2012 and the code implementing the convolution product is in C. We want to be able to have a DEBUG build and a RELEASE build of the application. These two types of build are different both for the generation parameters and for the behavior of the program they produce.

The project tree is as follows: 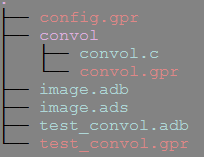 In the following, in simple cases the Debug pragma can also satisfy the same need regarding the behavior of the program depending upon the type of build 2.

It is quite common to define a DEBUG and RELEASE build as well as a NATIVE and CROSS target.

The program is succinctly implemented as follows: 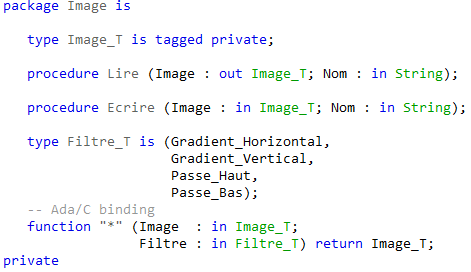 Through this “abstract” GPR, we will define both the build type and the definitions shared between GPRs.

Specifically, we will define what is a DEBUG build and a RELEASE build as well as the associated compiler options.

For the DEBUG build, we set the macros __DEBUG__ and Build_Kind that will be taken into account during pre-processing of the source files.

For the RELEASE build, we will consider that all compiler warnings are errors. 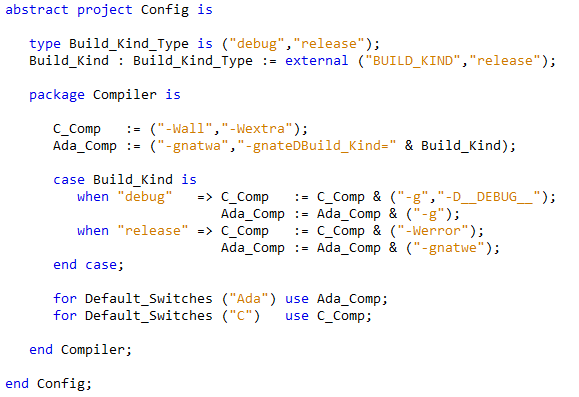 With this “library” GPR, we will provide the information required for the construction of the static library libconvol.a. We also note that the compiler configuration is the one defined by the config GPR. 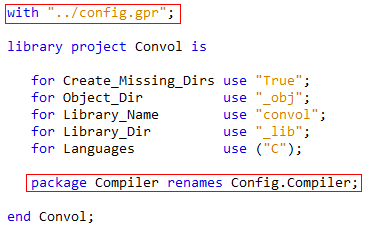 With this “normal” GPR, we will define the Ada entry point of our program. Like the previous GPR, it relies on the compiler configuration defined by the config GPR. 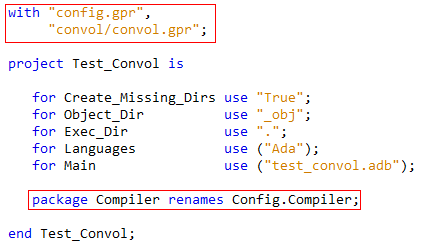 To generate the application you can either use the GPS IDE and select the desired build in the scenario view.

Screenshot of the build type selection.

Or call the GPRbuild tool directly from the command line by specifying the desired build. 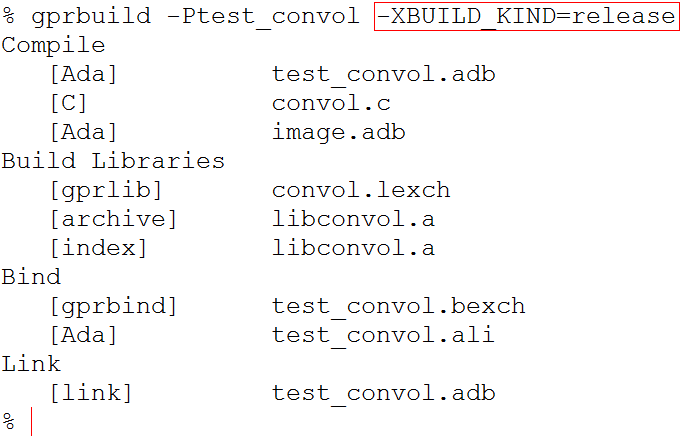 Screenshot of the command line construction.

In both cases, the compilation products will be the same: 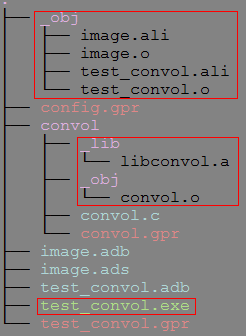 The GNAT GPR technology provides an efficient and scalable solution for the implementation of projects that can be both large and complex. This technology can be integrated into a development environment very easily.